2017 saw the recording of 3,426 gonorrhoea cases in the MiBa. To this, another 54 cases should be added that were notified to the NSID only. Thus, a total of 3,480 cases were detected. The cases affected a total of 3,263 persons, as 3,074 had a single case detected, 169 persons had two cases detected, 20 persons had three cases and two persons had four cases detected. A total of 2,092 (60%) of the cases occurred in men and 1,388 (40%) in women. This gender distribution was unchanged from the two previous years. The gender and age distribution of all recorded cases is shown in Table 1. 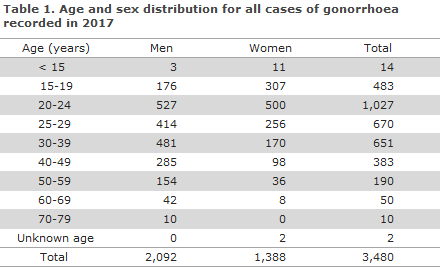 The age group most frequently registered with gonorrhoea among women was 20-24 years (36%).

Among 1,153 men notified as either homosexually or heterosexually infected, the age distribution depended on the mode of infection, Figure 1. 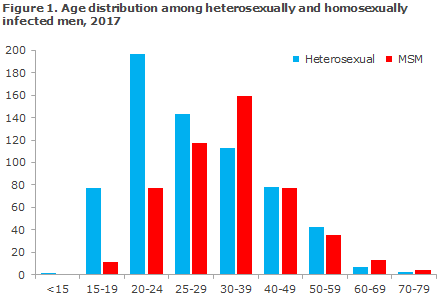 Two neonates were recorded with gonorrheal eye inflammation transmitted at birth. One of these two cases was notified. Additionally, ten children below 15 years of age were registered with sexually transmitted gonorrhoea. Six of these cases were notified with the NSID.

Table 2 presents the gonorrhoea incidence by area. For 2017, it was possible to calculate all incidences based on the patients’ area of residence, whereas the 2016 incidences were, in part, calculated based on the area where the sampling occurred. 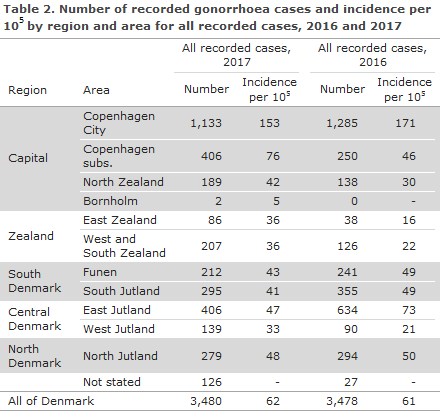 Among 2,008 clinically notified cases of sexually transmitted gonorrhoea, 1,229 were men and 779 women. Furthermore, the group of clinically notified cases counted one of the two children with congenital eye inflammation. Among 1,229 cases reported in men, 660 (54%) were acquired by heterosexual transmission, 488 (40%) by homosexual transmission. In 4% of cases (43 persons), the infected person was bisexual, and in 3% of the cases (38 persons) the mode of infection was not stated.

Among the women, it was stated that 19 (2%) of the cases occurred in pregnant women. According to the notifications, one man and nine women were sex workers. 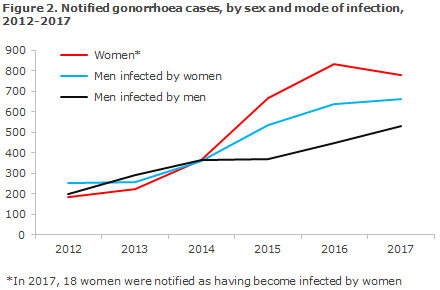 Among the 165 cases (130 men and 35 women) acquired abroad, 17 had been acquired in Thailand: 13 were men who had become infected by women, two were men infected by men, one was a bisexual man and one was a woman infected by a man. The remaining 148 cases were divided on 54 countries across the world.

Information about HIV status was available for 449 (92%) of the 488 men who were notified as having become infected by men. Among these, 84 (19%) were HIV positives; including 80 who were already known to have HIV, and four who were notified with newly detected HIV. Among the 660 men who stated that they had been infected through heterosexual contact, 405 (61%) had been tested for HIV. This included two known HIV positives. Among 779 women, a total of 519 (67%) had been tested for HIV. Two women from Africa were known to have HIV; all of the remaining were HIV negative.

From East Zealand and West & South Zealand, isolates were submitted corresponding to nearly 70% of the registered number of gonorrhoea cases, whereas this was the case for approx. 36% from the Copenhagen area. These deviations from the 42% average may, e.g., be due to differences in the frequency with which molecular biology detection methods are used.

The isolates were tested for ceftriaxone, azithromycin and ciprofloxacin susceptibility by determination of MIC (minimum inhibitory concentration, mg/l) and for formation of penicillinase, which indicates a high resistance to penicillin. 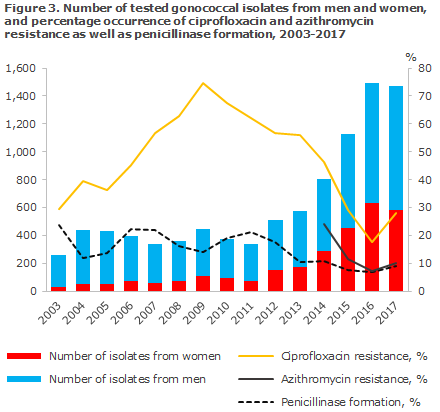 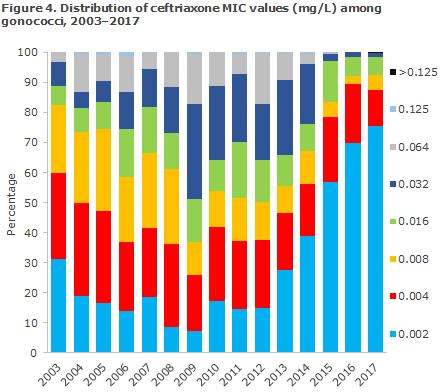 Both ciprofloxacin and azithromycin resistance occurred considerably more frequently among men (35% and 12%, respectively) than among women (17% and 6%, respectively).

Ciprofloxacin resistance occurred significantly more often among patients aged 30 years of age or more than among younger patients. Azithromycin resistance was higher than average in the 50-69-year age group.

Among both women and men (regardless of sexual orientation), the occurrence of ciprofloxacin resistance was higher when the infection had occurred abroad than when it had occurred in Denmark.

Among persons who had become infected in Denmark, the occurrence of ciprofloxacin resistance was highest for MSM (38%) followed by heterosexual men (28%), and lowest for women (20%). It may seem surprising that the two latter groups do not share the same level. 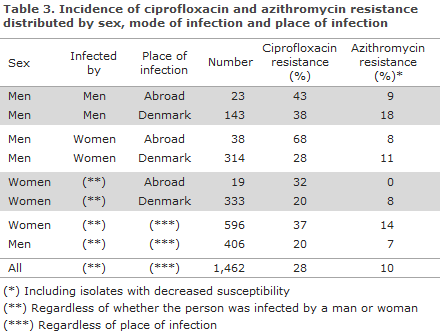 As part of a joint EU effort, the Reference Laboratory annually tests slightly more than 100 consecutively collected isolates against an expanded panel of antibiotics. In 2017, none of the 118 isolates were resistant to cefixime (an oral cephalosporin) or to spectinomycin. 2015 and 2016 also brought no reports of resistance to the two mentioned antibiotics. None of the drugs are marketed in Denmark.

Three of the isolates were from eye samples (two neonates and one 31-year-old man. Nine weeks later, the man had gonococci detected in the urethra). In two men, gonococci were cultured in synovial fluid from the elbow and ankle joint, respectively. In one man, gonococci were detected in an abscess in the preputium.

Finding of ceftriaxone resistance in 2017

At several locations across the world, ceftriaxone resistance has been detected among gonococci, and treatment failure has also been observed with this drug. In 2017, a case of urethral gonorrhoea was reported in a man in whom both ceftriaxone resistance and reduced susceptibility to azithromycin were found, i.e. the two drugs that form part of the recommended combination treatment.

The detected ceftriaxone resistance was only marginal (MIC = 0.25 mg/L). The patient was treated in accordance with current guidelines, and tested negative by NAT at a post-control; no secondary cases are known. No similar situations were reported in 2017. Thus, treatment failure has yet to occur in Denmark.