The annual DANMAP (Danish Integrated Antimicrobial Resistance Monitoring and Research Programme) report brings together results from the monitoring of the antimicrobial consumption in animals and humans and the occurrence of resistance in important bacteria from animals, humans and foods. The report is the result of the collaborative efforts of DTU Food, DTU Vet and Statens Serum Institut. The report has been published annually since 1995, and it is the most comprehensive source of monitoring of antimicrobial resistance in Denmark. In addition to standard monitoring chapters, the report includes special focus sections on the monitoring of special resistance-bacteria combinations such as carbapenemase-producing organisms (CPO), vancomycin-resistant enterococci (VRE) and methicillin-resistant Staphylococcus aureus (MRSA).

The 2017 report that was published on 2 October 2018 also includes text boxes describing new topics, e.g. the monitoring of the consumption of antimycolitica and fungal resistance, and resistance in Haemophilus influenzae and Mycoplasma genitalium. The report is available at www.danmap.org. In the following, we summarise main points concerning consumption and development of resistance. 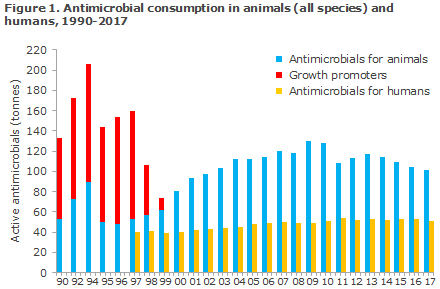 Approximately 90% of human consumption is used in primary healthcare, i.e. is prescribed by GPs, practicing specialists and dentists to the non-hospitalised part of the population, Figure 2. In DANMAP 2017, the human antimicrobial consumption in primary healthcare was stated using the following units of measurement: tonnes of active substance, defined daily doses (DDD), DDD per 1,000 inhabitants per day (DID), number of prescriptions per 1,000 inhabitants, number of treated patients per 1,000 inhabitants and number of DDD/preseciption. In the hospital sector, the consumption was stated as tonnes of active substance, DDD, DID, DDD per 100 bed days (DBD) and DDD per 100 admissions (DAD). 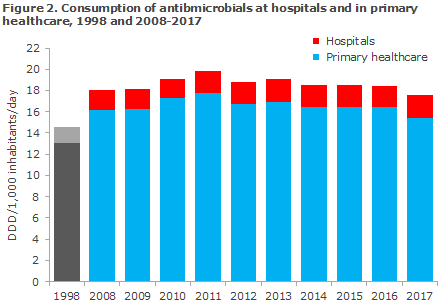 In 2017, fluoroquinolones, cephalosporins and carbapenems comprised 23% of the consumption of antimicrobials at hospitals, which is a slight increase from the 22% consumed the preceding year, but a drop from the 31% consumed in 2008. In 2017, the increase in the consumption of the critically important antimicrobials was observed in all of the five Danish regions. This increase was driven primarily by the use of cephalosporins (18%) and a slight increase in the use of carbapenems (6%). Part of the explanation for this increases may have been a prolonged supply issue related to the combination drug piperacillin with tazobactam, the consumption of which decreased by 17%. The consumption of fluoroquinolones continued following a decreasing trend in 2017 (from 8.37 in 2016 to 8.06 DBD in 2017), as has been the case since 2010.

DANMAP 2017 demonstrated that the consumption of antimicrobials by animals has declined for the fourth consecutive year. Since 2013, consumption has declined by slightly more than 16 tonnes (from 117 to 101 tonnes).

DANMAP 2017 comprised Salmonella testing in patients and Danish pigs as well as Danish-produced pork. Salmonella typhimurium continued being the most frequently occurring serotype (57%). The resistance profiles were dominated by the fact that a large share of the isolates were monophasic S. typhimurium, which are resistant to tetracycline, ampicillin and sulfonamides. For ciprofloxacin and 3rd generation cephalosporins, resistance has remained at a constant low level in isolates from human infections (5% for ciprofloxacin, 2% for cefotaxime and 1% for ceftazidime) and had not been found in pigs or pork.

Since DANMAP was established in 1996, and particularly in the past decade, the number of reported invasive infections in humans has increased considerably; from 8,277 isolates in 2009 to 10,957 isolates in 2017, which is a 33% increase.

The resistance report is based on notifications from all departments of clinical microbiology in Denmark, and includes the first isolate per patient per sample per year.

Escherichia coli causes approx. 50% of the notified invasive infections. The number has doubled in the course of the past decade and comprised a total of 5,114 individual cases in 2017. From 2016 to 2017, a slight increase was observed in the resistance to nearly all tested antimicrobials in invasive E. coli isolates, Figure 3. In 2017, the following resistance was observed: ampicillin 46%, mecillinam 14%, piperacillin with tazobactam 4.5%, gentamicin 6.0%, cefuroxime 9.7%, 3rd generation cephalosporins 6.7% and carbapenems <1 %.

In 2017, klebsiella pneumoniae comprised a total of 1,183 individual cases. Also here, the number of invasive infections has followed an increasing trend throughout all of the years, with the greatest increase occurring from nearly 950 cases in 2015 to 1,173 cases in 2016. As was the case for E. coli, an increasing number of isolates were also seen from urinary tract infections as the number of isolates notified from urines in general practice more than doubled, and a more than 50% increase was seen in the number of isolates from hospital urines (8,106 and 8,948 isolates, respectively in 2017). The most marked resistance changes from 2016 to 2017 were found for resistance to mecilinam and sulfonamides in isolates from urinary tract infections, where the resistance to mecillinam increased from 10% to 16%, and resistance to sulfonamides increased from 18% to 26%, Figure 4. Despite this trend, the past decade has seen a general decrease in the resistance to the critically important antimicrobials. In 2017, the following resistances were observed in invasive isolates: mecillinam 19%, piperacillin/tazobactam 7.4%, gentamicin 3.2%, cefuroxime 11%, third-generation cephalosporins 7% and carbapenems <1%. 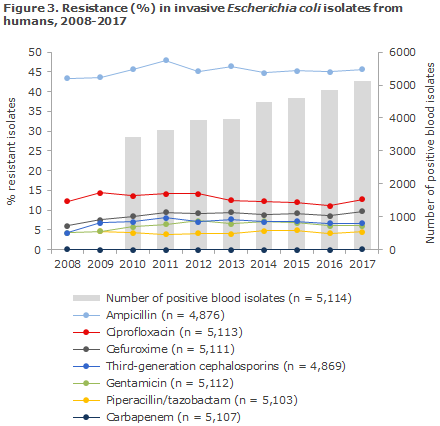 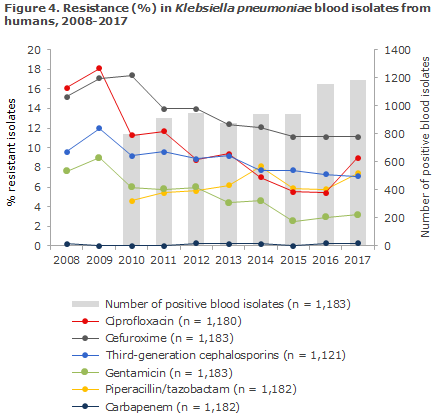 As was the case for other invasive isolates, the number of bacteraemias with Staphylococcus aureus increased, to 2,104 cases in 2017. The share of methicillin-resistant Staphylococcus aureus (MRSA) bacteraemias was 2.2% in 2017 (2.1% in 2016), and the share thus remained low. The total number of new MRSA cases recorded in 2017 (3.579) was in line with the 2016 level (3,555 cases), which is more than four times the 2008 level (853 cases). The strong increase seen in the past 10 years is, in part, due to the introduction of new screening practices, including the introduction of livestock MRSA into the screening programme. However, it is also due to an increase in the number of community-acquired cases and the development in livestock MRSA. Livestock MRSA comprised the largest single group (34%) of the total number of MRSA cases in 2017.

In 2017, a total of 123 carbapenemase-producing organisms (CPO) were found in 115 patients, compared with 115 CPO from 99 patients in 2016, corresponding to a 6% increase. More than one isolate from each patient was counted if the isolate belonged to another species and/or if the isolate was of another type of carbapenemase.

Of the 123 submitted CPO, 104 were carbapenemase-producing enterobacteria (CPE), 15 Acinetobacter spp. and 4 Pseudomonas spp. In 2017, a total of 96 patients had CPE, whereof 27 had stayed abroad before their CPE was established, whereas 13 of the patients had not travelled abroad prior to their CPE finding. For the remaining 57 patients with CPE, no information was provided about travels.

Other important findings in 2017

For the first time, resistance was recorded for Haemophilus influenzae in invasive infections in humans (469 invasive cases in the period from 2014 to 2017, varying from 106 to 128 annual cases, recorded in the MiBa), of which the ampicillin resistance average was 18% and the cefuroxime-resistance average was 16%. DANMAP 2017 also describes resistance among bacteria from sexually transmitted diseases, including Neisseria gonorrhoeae (1,473 cases in 2017, whereof 9% were penicillinase-producing and 28% were resistant to ciprofloxacin). For the first time ever, Mycoplasma genitalium was also included, an area in which national Danish monitoring is being established. In Danish isolates of M. genitalium, resistance to azithromycin was found in >50% of the cases.

This annual report is described in EPI-NEWS 46/18