Data from the Danish Microbiology Database

As in the previous years, the data needed for the preparation of the present report covering 2019-2021 were collected via the Danish Microbiology Database (MiBa). The data comprise all positive and negative test results for oculo-genital infection caused by Chlamydia trachomatis at all departments of clinical microbiology (DCMs). The data include civil registration numbers, and disease episodes can therefore be delimited to the individual level. A new disease episode is defined as an interval of more than 42 days between two positive test episodes. Several negative test results within a single year are counted as a single negative testing episode. For patients with a valid civil registration number, information about the municipal code and thereby the area and region is collected from the Danish civil registration system. In the current annual report covering 2019-2021, numbers from 2018 are often provided to allow for comparison. Until the end of 2015, monitoring was based on the laboratory notification system, as shown in Table 1. The differences between the two methods are described in EPI-NEWS 34/2016.

The extent of chlamydia testing performed in private laboratories that market themselves via the internet remains unknown. Such data are not included in this report. When rectal chlamydia is established or when lymphogranuloma venereum (LGV; EPI-NEWS 20/2008) is suspected, some DCMs and STI clinics submit material to Statens Serum Institut (SSI) for relevant specialised testing. 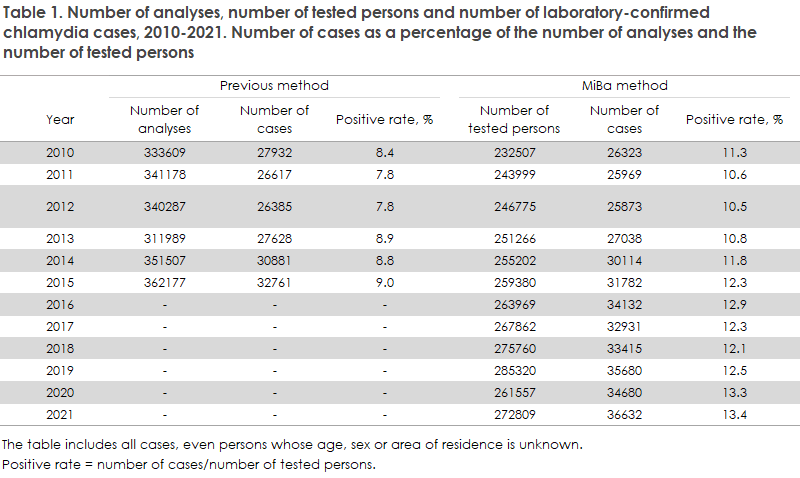 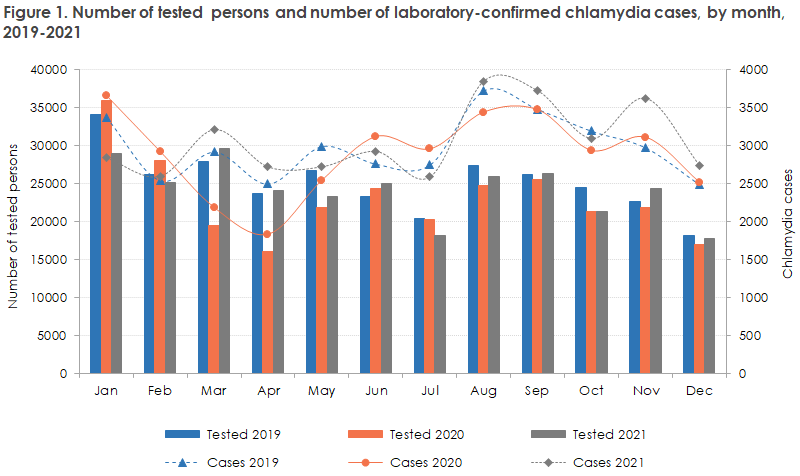 Table 2 divides the numbers by sex and age groups and presents the number of chlamydia cases and the incidence per 105. The incidence of detected cases increased from 2018 to 2021. Compared with 2019, a decline was observed in 2020 for both sexes. The group of 15-29-year-olds comprised the largest share of the detected cases and has remained stable at around 81% for men and 89% for women since 2017. In 2021, men comprised 42% of the diagnosed cases. This share has followed a stable, increasing trend since 1994 when the share was 23%. Compared with 2018, the incidence for men and for women alike increased in the period until 2021, except for the decline observed in 2020. 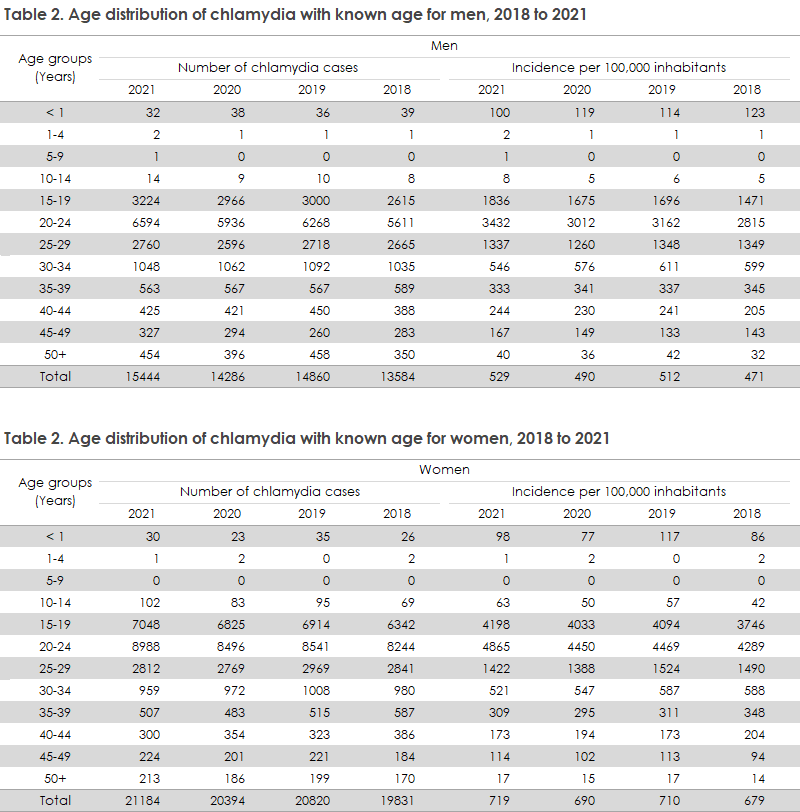 From 2018 to 2021, the national incidence of laboratory-detected chlamydia cases (per 105 inhabitants) increased for men and women alike.

For men, the incidence remained unchanged in Copenhagen subs. but declined in North Zealand, East Zealand and on the Island of Bornholm. 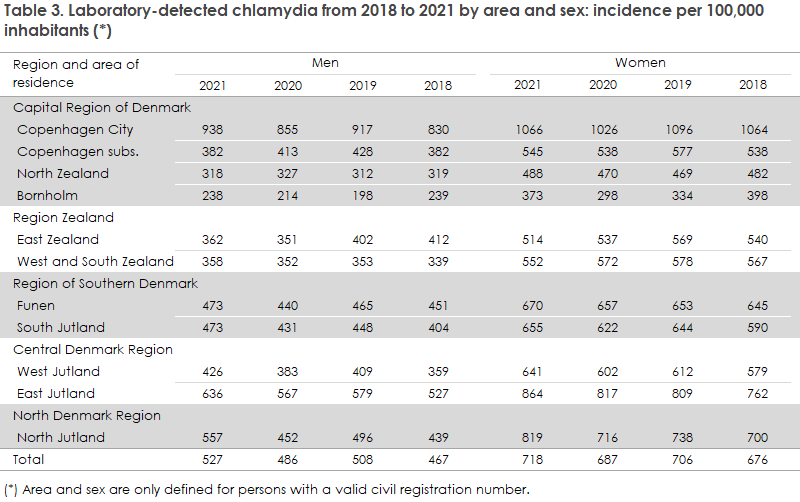 Notably, both sexes recorded a considerably lower number of tested persons in 2020, but the positive percentage was considerably higher than in 2019. 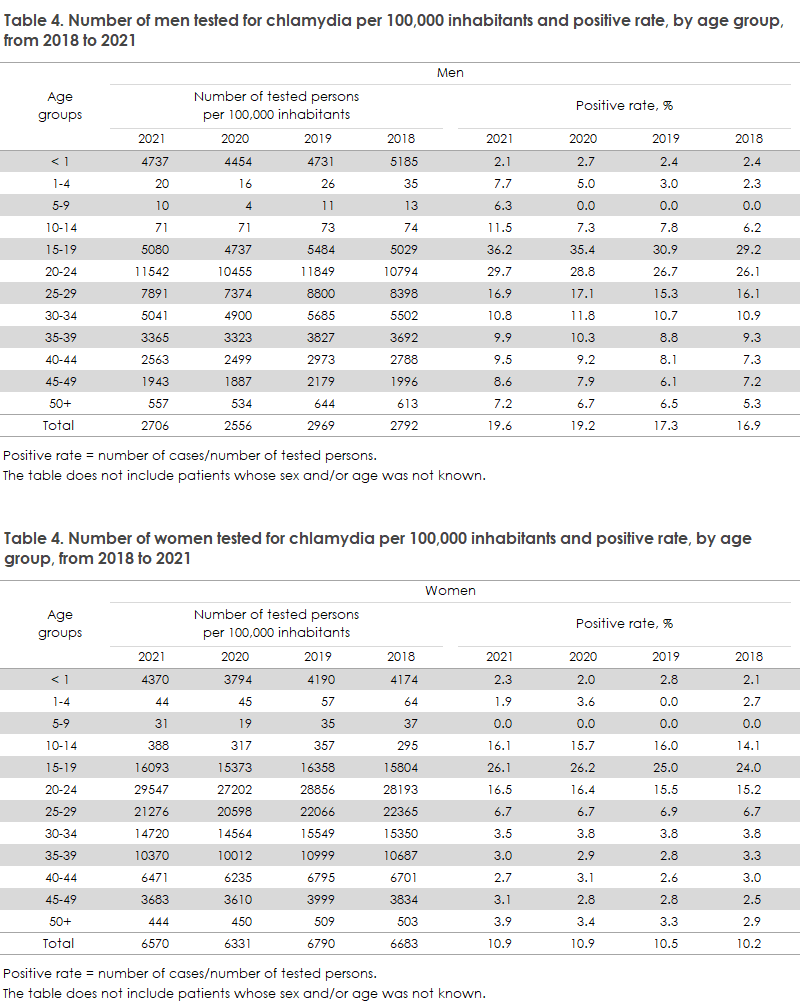 Overall and in most Danish areas, the number of men and women (per 105 inhabitants) tested in 2021 declined compared with 2018, and a large decline was observed in 2020. Across Denmark, the share of tested women is more than twice as high as the share of tested men. At the national level, the positive rate increased for both sexes from 2018 to 2021; by 20% for men and 11% for women.

For women in the City of Copenhagen and East Zealand, the positive rate remained unchanged, whereas it followed a slightly declining trend in West and South Zealand. 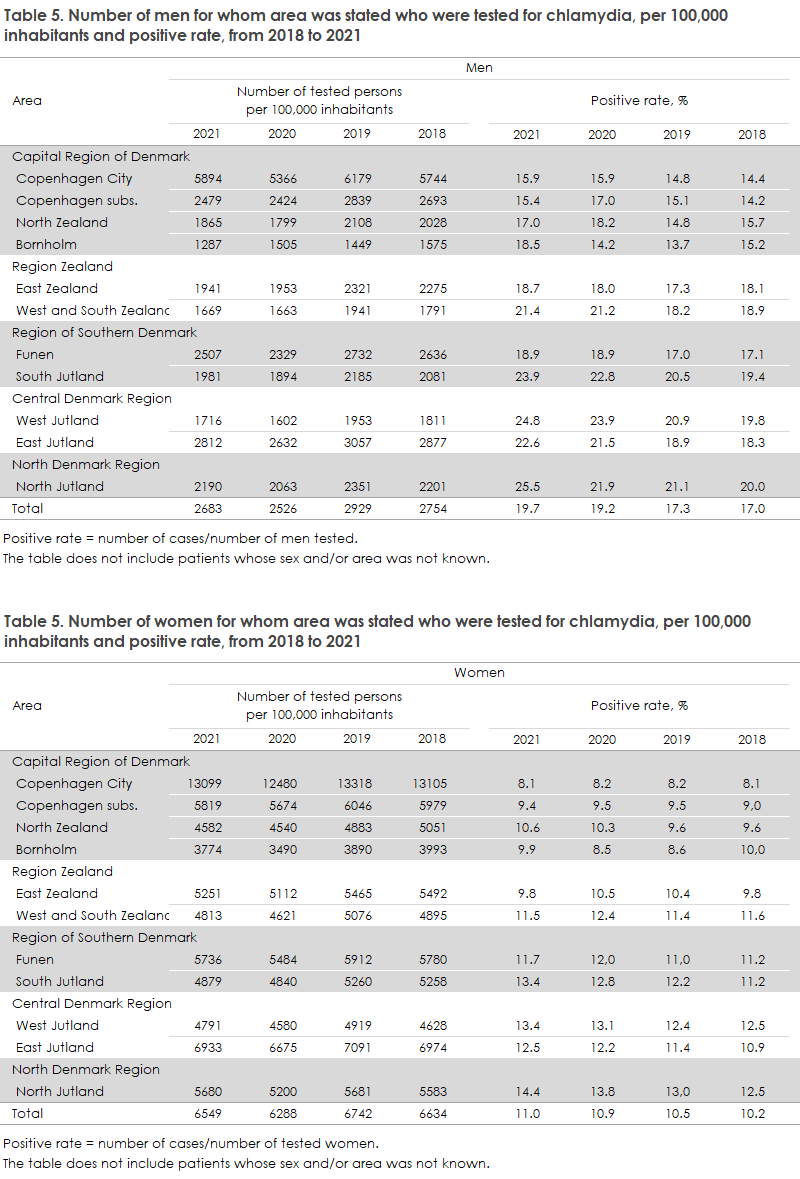 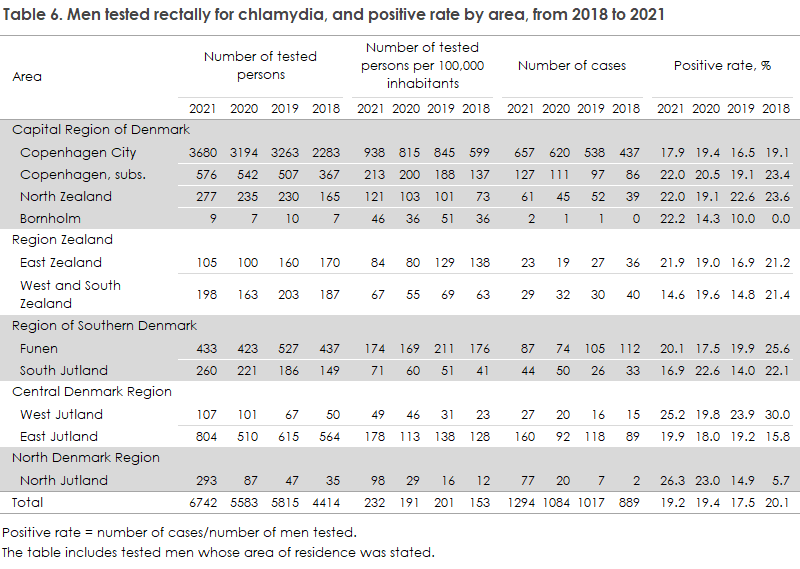 The SSI performed specific LGV testing by NAAT (nucleic acid amplification test) for 1,236 patients (858 men, 374 women and four persons for whom the sex had not been stated). The number of ano-rectal samples was 1,048 (762 men, 282 women; and in four cases, the sex was not stated). Since 2018, the number of tested men has increased as has the share of ano-rectal swabs among men. LGV testing is performed for 59% of men with ano-rectal chlamydia, which is a six percentage point increase compared with 2018. However, the incidence of detected LGV has declined drastically since 2019. Thus, LGV was detected in only 16 men (2%) in 14 ano-rectal samples and two samples for which the sampling location was not stated. 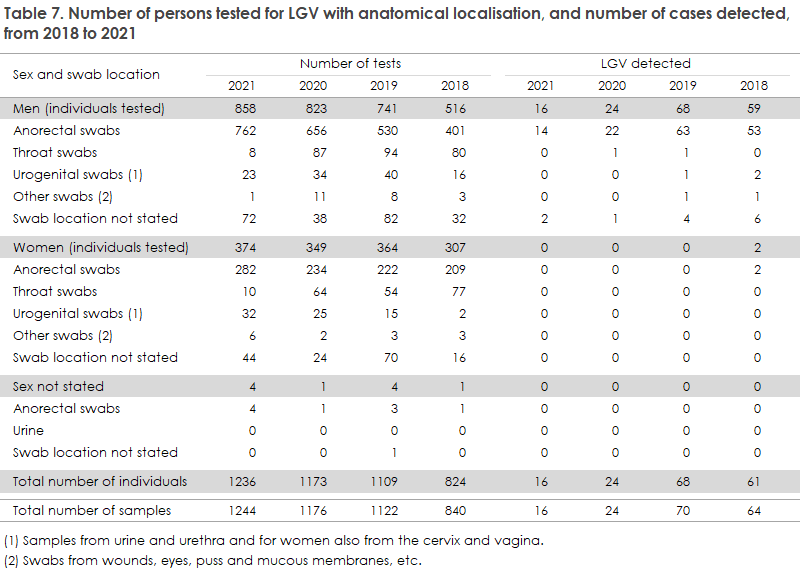