The age-specific distribution of cases in 2018 and 2019, Figure 2, displays a classic shape for campylobacter infections with a high incidence among young adults in their twenties. Even so, the incidence among elderly people above 85 years (and particularly among men) was higher than previously observed; and among young children (0-4 years), the incidence was clearly lower than previously observed. These trends were observed in 2018 and 2019 alike; but in 2019 the incidence was comparatively higher among 15-24-year-olds (122 per 100,000 persons) and among persons above 85 years of age (176 per 100,000) than among the same age groups in 2018 (105 and 127 per 100,000, respectively). As generally observed for campylobacter infections, 2018-19 recorded a minor male predominance among the notified cases; males comprised 53% in 2018 and 54% in 2019. 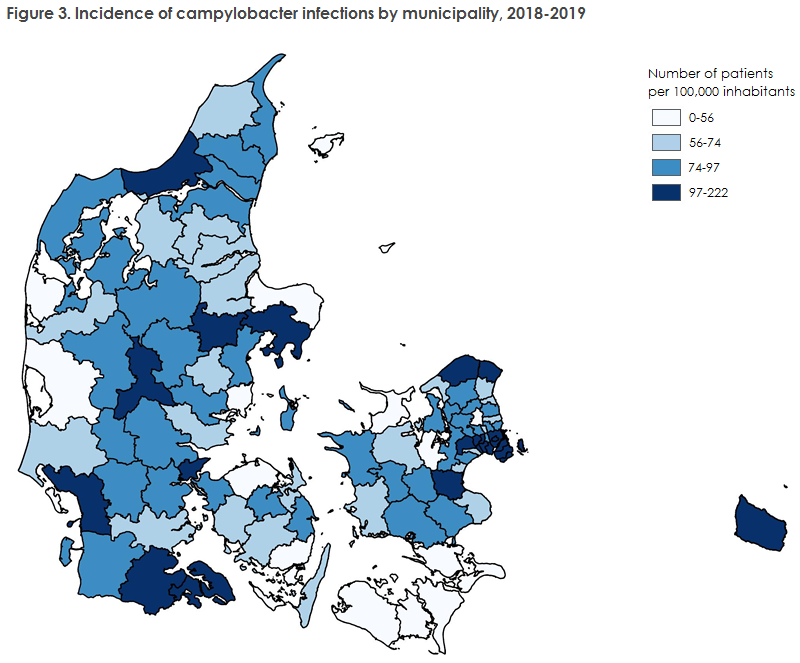 In 2019, Turkey accounted for more registered infections than any other country with 192 registered infections, followed by Spain (191), Thailand (90), Indonesia (85), India (60), France (50) and Morocco (49). These countries were also previously reported as those in which campylobacter infections were most frequently reported, but it should be noted that these destinations also reflect countries visited by many Danes.

In the 2018-2019 period, the Danish Water and Food Outbreak Database (FUD) recorded a total of four larger campylobacter outbreaks. Two of these outbreaks occurred on the island of Bornholm (one in February-March 2018 and the other in November 2019), and the source of infection was not verified, although a case-control study indicated that milk may have been the source of the latter outbreak. A third outbreak occurred in September 2018 among school children who had raw (unpasteurised) milk served during a farm visit. As described, genetic monitoring of campylobacter infections has demonstrated that a large number of small outbreaks probably occur. Furthermore, an unusually large outbreak was detected in 2019 via whole-genome sequencing of bacterial isolates, EPI-NEWS 6/20. The outbreak recorded 88 confirmed patients, but it is estimated that the outbreak did, in fact, count several hundreds of cases of the same genetic type, and the scope of the outbreak was also reflected in national monitoring, which recorded more than 800 more cases in 2019 than the previous year. The outbreak was caused by Danish-produced chicken.

This annual report is also described in EPI-NEWS 6/20