In 2016, a total of 4,678 cases (82 per 100,000) of Campylobacter spp infections were recorded; 7% more than the previous year and the highest number of annual infections ever recorded. In contrast hereto, a decrease was observed in 2017, as a total of 4,243 cases were recorded (74 per 100,000), i.e. fewer than in 2015. The annual number of infections recorded during a longer period is presented here. The species was determined for a subset (435) of the strains and 27 (6.2%) hereof were C. coli, whereas the remaining were C. jejuni. Campylobacter isolates are normally not submitted to the SSI for characterisation.

Figure 1 shows the age-specific incidence. As is typical for Campylobacter, the disease burden is more or less equally distributed across all age groups, but with excess representation of people who are in their twenties. The number of cases per age group is presented here and here. As also observed in previous years , a slight overrepresentation of boys and men was seen among the patients; they comprised 54% in 2016 and 53% in 2017. 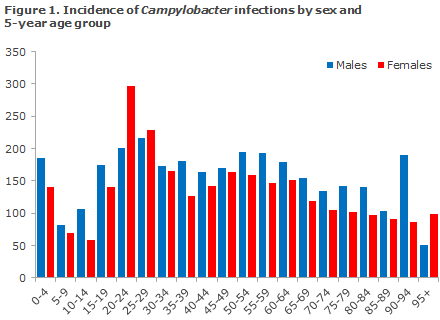 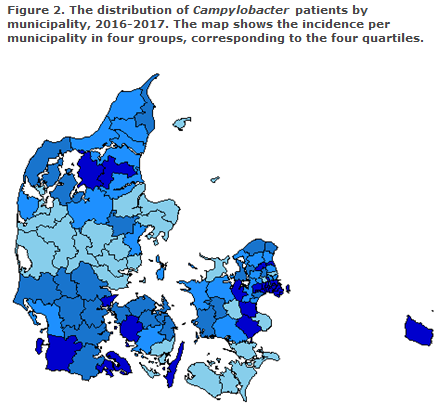 The largest number of patients had become infected in Thailand with 218 recorded infections, followed by Spain, Turkey, Indonesia, India, Greece and Morocco with 207, 155, 137, 88, 82 and 74 infections, respectively. This travel distribution naturally reflects the destinations visited by many Danes.

Campylobacter outbreaks are relatively rare. In the National Food Outbreak Database, 2016 and 2017 saw 3 and 2 outbreaks of Campylobacter infections, respectively. In June 2016, an outbreak occurred in the Copenhagen area among the employees of several companies who all used the same catering company as a lunch provider. A total of 103 persons from 19 companies were affected, and the investigation indicated that the source was cross contamination in the handling of duck meat and fresh greens. Another outbreak, counting fewer cases, was interesting as it was detected because selected strains from patients were collected and whole-genome sequenced as part of a research project. This outbreak occurred in May and June 2016 and involved eight persons, all of whom had become infected on the island of Bornholm. The source of infection could not be detected unequivocally, but the best hypothesis was that the outbreak was due to Italian rucola and napolitana salads that had been withdrawn earlier in May following detection of Campylobacter. In June 2017, 66 of 245 school children fell ill after visiting a farm near Aarhus where they had raw milk served directly from the barn. A cohort study demonstrated that ingestion of raw mild was very likely the cause of the outbreak. In the 2016-17 period, no water-borne Campylobacter outbreaks were described.