In Denmark, invasive meningococcal disease (MD) is monitored via the clinical notification system (Form 1515) handled by the Department of Infectious Disease Epidemiology and Prevention and by the Neisseria and Streptococcal Reference Laboratory, which receive meningococcal isolates and other biological material from the departments of clinical microbiology (DCM). MD covers meningitis, sepsis, and culture or DNA detection of meningococci in material from normally sterile locations, e.g. joints.

MD occurred in all age groups, see Table 2. The median age was 19 years (range 0-86 years). The highest incidence was seen in children aged less than three years and in the 14-17 years age group. The M:F ratio was 2.4. In particular among children below 7 years of age, the gender difference was clear; but also among adults, the share of men was considerably higher than has been the case in recent years.

Among the 37 patients, eight had meningitis, 18 sepsis, nine had meningitis as well as sepsis and two had other invasive diseases (of the bone and corpus vitreum, respectively). The monitoring is unable to distinguish between meningococcal disease with sepsis and with bacteraemia. Therefore, in this report, the term sepsis is used to denote a positive blood culture, whether the clinical criteria for sepsis are met or not.

A total of 18 (49%) patients had MD caused by group B, nine (24%) by group W, six (16%) by group C and two (5%) by group Y, Table 2. No cases of serogroups A, X, Z or 29E were notified. For two patients (5%), the group was unknown. One of the notifications was based exclusively on the clinical picture; and for the other case, the SSI has not received any sample material for grouping.

The total number of MD cases has remained stable for the past four years after having followed a decreasing trend since the 1990s. The occurrence of the different serogroups shifts constantly. As in 2018, group B and group W were the most frequently occurring groups. Having followed a decreasing trend for the past six years to record only a single case in 2017, the number of group C cases increased to six in 2018. Figure 1 presents MD by serogroups for the years 2006-2018.

In 28 (76%) of the cases, meningococci were detected by culture, including four that were also detected by PCR. One patient was diagnosed based on the clinical picture only. Eight cases were diagnosed by PCR solely; in seven of these cases, the diagnosis was made at Statens Serum Institut (SSI) with subsequent PCR-based grouping. In the final case, the PCR diagnosis was established in a regional DCM, but with no subsequent grouping.

In case of PCR detection of invasive meningococci, we recommend that the DCMs submit any relevant clinical sampling material to the SSI for grouping. 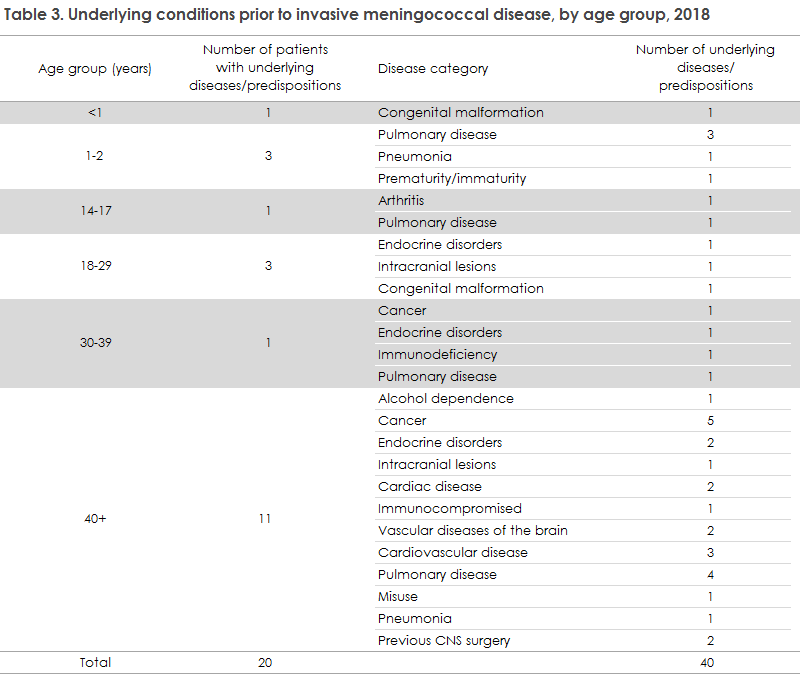 One of the three children below one year of age had underlying disease prior to their MD. An underlying condition was present in three of the five children in the 1-2 years age group, both of the children in the 7-13 years age group, one of the four 14-17-year-olds and three of the four 18-29-year-olds. Among those who were 40+ years of age with MD, 11 of the 14 cases had an underlying condition, see Table 3. The three most frequent categories were cardiac and pulmonary disease, pulmonary conditions and cancer.

Three patients (8%) died due to MD in 2018: One child <1 year, who had congenital malformations (serogroup B), and two patients in the 40+ years age group, one of whom had an underlying condition (serogroup W) and the one who had no known risk factors (serogroup B).

Sequelae were recorded in seven patients following MD, including two with hearing impairment or loss of hearing, two with abnormal involuntary movement, one with learning disabilities, one with vascular disease of the brain and one with unspecified sequelae.

This annual report is also described in EPI-NEWS 40/19.