Since pneumococcal vaccination was introduced into the vaccination programme, a marked decline has been observed in the number of cases of pneumococcal infections. This applies to vaccinated children as well as to the rest of the population according to new numbers from Statens Serum Institut. 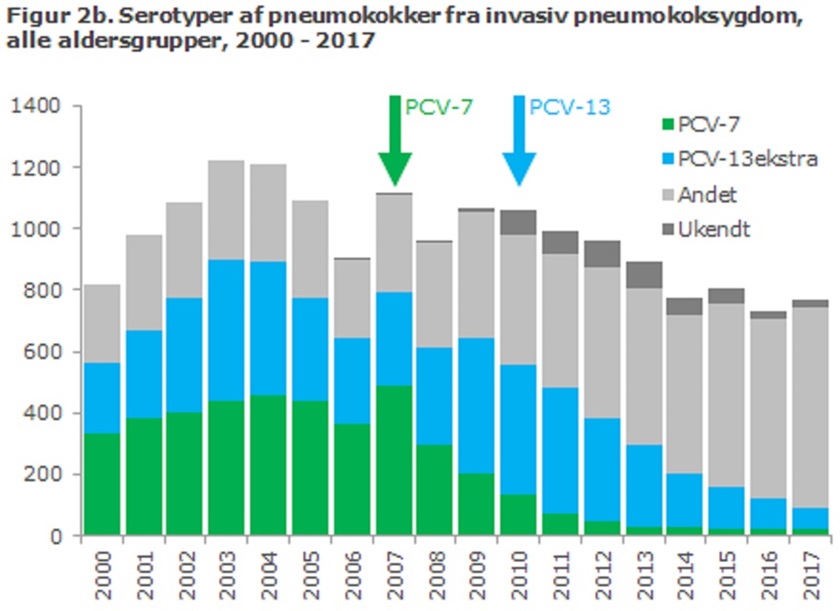 As from 1 October 2007, Danish toddlers have been offered vaccination against pneumococcal infection as part of the childhood vaccination programme. This has had a very clear effect on the number of people affected by invasive pneumococcal disease both among vaccinated children and in the rest of the population, as transmission of infection from children has been reduced.

Coverage has now reached at least 95%

"The coverage of the pneumococcal vaccination scheme has increased in recent years. Coverage has now reached at least 95% for each of the three doses, which is encouraging", says
Section Head Palle Valentiner-Branth from the SSI

Subtypes not covered by the vaccine have increased

More than 92 different subtypes of pneumococci are known, and their propensity to cause infections and serious infections in humans varies. The pneumococcal vaccine used in the childhood vaccination programme protects against infection with 13 subtypes.

Even so, the occurrence of invasive pneumococcal disease caused by subtypes not covered by the 13-valent pneumococcal vaccine used in the childhood vaccination programme has increased in recent years.

“This increase, however, does not overshadow the overall benefit gained by the vaccine. The same trend was also seen in other countries that enjoy the same high vaccination coverage as Denmark, e.g., England. Therefore, efforts are being made to develop new vaccines that may protect against some of these types”, notes Palle Valentiner-Branth.

More on the subject

Accept of cookies - SSI uses cookies for statistics and to improve the user experience. If you continue to use our website, we will assume that you agree to the use of such cookies.
Find out more about cookies and how you can refuse them.