Whooping cough returned to its normal level in 2017

After the latest whooping cough ended in the beginning of 2017, the number of cases seen in the rest of the year dropped to the normal level.

A total of 1,068 whooping cough cases were detected in 2017. The highest number of cases was seen in Copenhagen, North Zealand and Funen, and the lowest on Bornholm and in North Jutland. 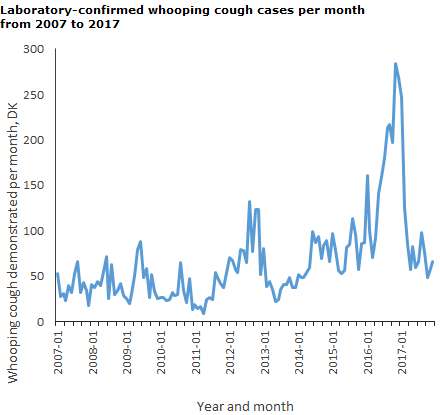 If a child below 2 years of age gets whooping cough, and this is confirmed by a laboratory, the doctor has an obligation to notify the case. Thus, a total of 107 children under the age of 2 years were notified with whooping cough.

Among these children, 57 had not received vaccination, whereas 16 had received all of the three initial whooping cough vaccinations offered to infants. Young unvaccinated or partly vaccinated children are more affected by the condition than others and they are more often admitted to hospital. No deaths due to whooping cough were recorded in this age group in 2017.

Whooping cough is a highly infectious bacterial infection that causes very heavy coughing spells. Among small children, the spells are characterised by a whooping sound that occurs then the child inhales following the spell. Whooping cough vaccination forms part of the vaccination programme at 3, 5 and 12 months of age and at 5 years of age. The main aim of the vaccinations is to protect infants against the infection that may run a serious course and which is occasionally life-threatening in this age group.

The Danish Health Authority is currently assessing if the prevention of whooping cough among infants may be improved. This is done via a working group under the Committee of Vaccination.