The number of HPV-vaccinated girls rose in 2017. A total of 30,974 girls initiated their course of the HPV vaccination programme in 2017 compared with 15,237 girls the previous year. The corresponding figures for 2015 are 16,261, 2014 26,169 and 2013 28,898. We need to go back as far as 2012 to see more girls vaccinated, i.e., 31,794 girls in 2012. The renewed trust in the HPV vaccination programme may likely be attributed to the fact that several recent scientific studies have been published that underpin the vaccine’s effect and safety, and to the effect of the joint campaign “Stop HPV”, organised by the Danish Health Authority, the Danish Cancer Society and the Danish Medical Association, with support from the SSI and various medical societies, partly because of the campaign’s high social media presence. Thereby the campaign reaches the target group of doubting or hesitant parents who may not seek information with their GP or at the authorities’ websites. The campaign has also been helpful in re-focusing attention to the fundamental objective of HPV vaccination: preventing cervical cancer.

In November 2017, a new 9-valent HPV vaccine with broader coverage was introduced into the childhood vaccination programme. Preliminary figures show that during the first two months after its introduction, a total of 6,951 girls initiated their HPV vaccination, see figure. This suggests that the new vaccine is in high demand, and it will therefore be interesting to follow the programme’s coverage in 2018. 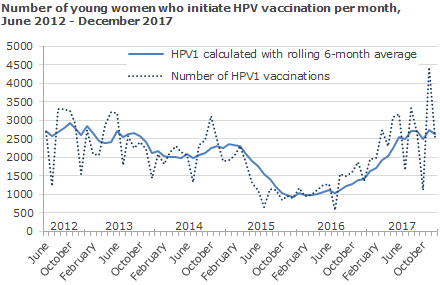