The decrease was seen among Danes and immigrants alike, but nearly half of all tuberculosis cases had presumably become infected in Denmark.

The development in the number of notified TB cases in the 1991-2017 period, by persons of Danish and non-Danish origin, and the total incidence per 100,000 are shown in the figure. 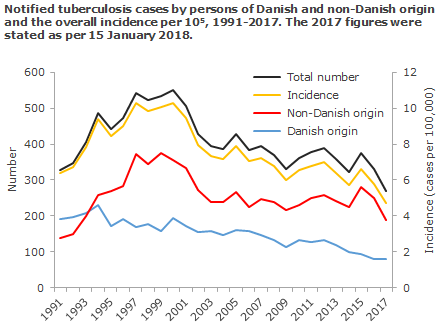 As previously, the highest incidence (11.8 cases per 100,000) was seen in the City of Copenhagen, corresponding to 27% of all detected tuberculosis cases.

Greenlanders in Denmark still form the largest single group, stated as number of cases, among TB cases of non-Danish origin, whereas the highest TB incidences are seen among people from Eritrea, Greenland, Somalia, the Philippines and Pakistan.

Although the number of tuberculosis cases declined once again in 2016 (and likely also will in 2017, see figure) after increasing in 2015, several conditions are threatening the WHO’s long-term objective of eliminating TB by 2050.

The number of TB cases in persons of non-Danish origin has not been declining since the beginning of the 2000s. It is still important to ensure effective screening for active TB in fugitives, migrants and family-reunified people from areas with a high TB incidence. Additionally, screening should be considered particularly of younger individuals of non-Danish origin for so-called latent TB infection, as preventive treatment will, in many cases, serve to avoid that TB later becomes active.